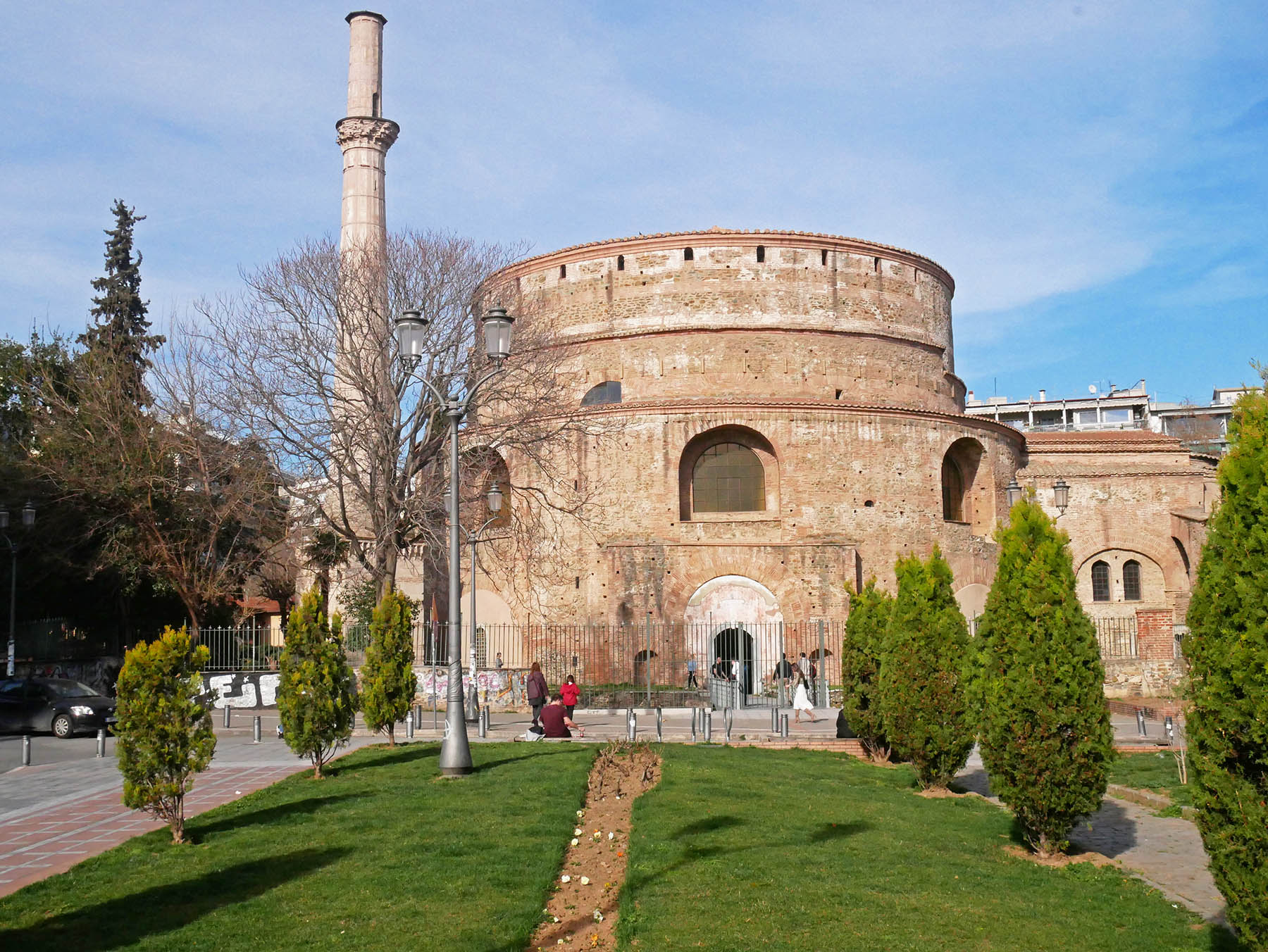 Camara: Perhaps the second most important landmark of Thessaloniki after the White Tower. It is part of the Galerius complex, meaning the works constructed under the initiative of the tetrarch Caesar Maximianus Galerius. When he took command of the eastern part of the Roman Empire, Galeries established Thessaloniki as his base. The Camara or Arch of Galerius was positioned vertically on the important Via Egnatia and was dedicated to the victory of Galerius against the Persians. Today, it bears reliefs on its surface, mainly of a narrative character. By 1953, Egnatia still passed under the arch, but when the works for the broadening of the avenue started, its western pillar and the buildings and houses that surrounded it were knocked down in order to create the square we see today.

Rotunda: A building of the 4th century with aesthetic references to the Pantheon of Rome, it was probably built as a mausoleum for Galerius or, according to other people, as a temple dedicated to Zeus or the Kawirs. With the prevalence of Christianity in the 5th century, it was converted into a church dedicated to Aghioi Asomatoi. During the rule of the Ottoman Sheikh Suleiman Chortatzi, the Rotunda was converted into a mosque and had a minaret (1590). The sheikh left his mark on the building with a relevant inscription, while his tomb lies in the courtyard. The impressive interior with the dome and the decorations attracts many visitors. The Rotunda has been declared a World Heritage Site by UNESCO. Its other name, Aghios Georgios, is owed to the small chapel in the courtyard, where the relics of the church were transferred when it was converted into a mosque.

The Palace of Galerius: The imperial palace was brought to light by excavations in 1930, on today's Navarino Square. According to historical sources, it had been destroyed in the 7th century. Successive excavations brought to light the central peristyle atrium, which had rooms on its three sides and was isolated from the rest of the buildings by arches with mosaics. To the east and before the Hippodrome, there was a vaulted two-storey building and a monumental basilica for formal hearings. The palatial worship area was a Nymfaio with a fountain. The Octagon was an administrative building, a richly decorated hall on the south side of the complex.

The Hippodrome of Galerius: The Hippodrome could not be missing from a Roman complex and Galerius built his own to the east of the palace, where the namesake square stands today. Very few sections of this construction have survived, and perhaps most of them are located at the foundations of the surrounding buildings. The Hippodrome was also the place where the great slaughter of Theodosius took place, when 7,000 people were massacred in it as an act of revenge for the murder of the military commander Vouterichos during riots (390 AD). In the area of Ippodromou Square stands the Thessaloniki History Centre, which was built on the plot of a building that had collapsed in the earthquake of 1978, killing 39 of the tenants.