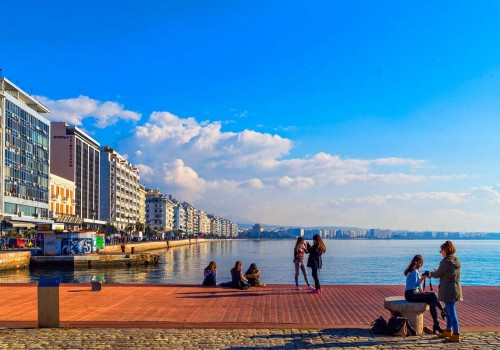 When you look at the view from the sea front or from the Upper Town, the harbour cranes stand out: like long-legged prehistoric animals, they emerge in the humid atmosphere, turn right and left, then crouch in search of ... their food. For 2500 years, the port founded by King Cassander, General of Philip II and Alexander the Great, justifies its existence and place! There is unceasing movement and huge cargo ships constantly load and unload goods, giving photographers unique atmospheric images.
At the beginning of the old sea front, in the rebuilt buildings of the old warehouses, people come and go in the venues and museums and participate in outdoor festivals. During the International Film Festival, a truly cosmopolitan world is created.
The warehouses of the harbour were constructed in 1910 and designed by the architect Eli Modiano, with the typical morphology of the European industrial buildings of the late 19th - beginning of the 20th century. Out of the warehouses, 1 was given to the Thessaloniki Film Festival. Warehouse D is home to the cinema museum and movie theatre, A houses the photo museum (C is for events). The impressive customs building was also designed by Eli Modiano with influences from the French architecture of the time. It suffered serious bomb damage from the Second World War and the earthquake of 1978. In the late 1980s it was partially restored. Since 1987 it has been operating as a passenger terminal.