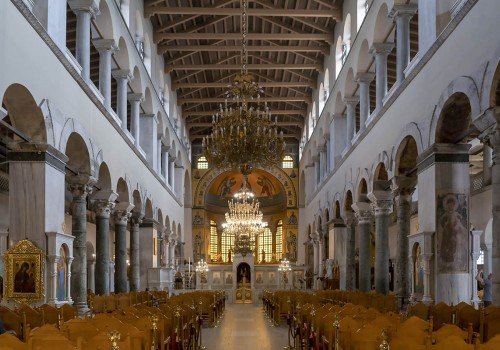 Ascending the street of the Unknown Soldier on the side of the ancient agora, you arrive at Agios (Saint) Dimitrios' Street and across the street the great church bearing the same name; one of the most characteristic monuments of the city, with its impressive courtyard and magnificent interior. It all started with a small prospect that was built after 313 on the ruins of a Roman bath on which the saint was martyred in 303 - according to tradition a place where myrrh sprang and from which the saint became known as Myrrhovlitis.

In the middle of the 5th century, the prefect of Illyric Leontius, believing that the saint healed his illness, built a large three-aisled basilica, which burned down around 620. An impressive five-aisled basilica was immediately built at the same point and then the "kivorio" was constructed and considered the "house of St. Demetrius". In 1493 the church was converted into a mosque and given the name Kasimie. It was returned to Christians in 1912.The story continued with even more disaster in 1917 when the great fire of Thessaloniki struck. The fire stopped only after it had completely destroyed the majestic church with its famous mosaics and frescoes. Only the walls and the marble columns remained. However, during the research and preparation that took place in the following years for its restoration, significant mosaics and frescoes came to light that wouldn't have otherwise been discovered.

The restoration, with various delays during the 1940s war, was completed in 1948 and the church was fully functional a year later on the saint's feast day. The temple was fitted with cement beams due to fear of future fire. The colonnades were restored, the marble decoration was completed and the mosaics that had been discovered were secured.

In 1978 the relics of Saint Demetrios returned from the abbey of San Lorenzo in Campo, Italy and were placed in a silver urn, where they are still kept today. Large portable icons for the icon screen were painted by artists such as Fotis Kontoglou, Spyros Vassiliou and others. In the southeast corner there is the chapel of Saint Eutymite, a small three-aisled basilica of the 9th-10th century with interesting frescoes from the early 14th century.

One of the most impressive sights of Thessaloniki with a particularly evocative atmosphere is hidden under the transverse aisle of the temple of St. Demetrius.

The crypt is in the eastern part of the Roman bath where, in Byzantine times, according to tradition, holy water sprang up. Now an exhibition has been set up with the sculptured decoration of the temple at various phases of its history: works that were saved by fire or found in excavations . The most impressive part is the central semicircular space which contain five niches, a triple tank where the myrrh (three phases, 4th, 6th and 12th-13th centuries), architectural sculptures of the 5th century, fragments from the 13th century Holy Trinity, fragments of a monument of the 14th century, mosaics and wall paintings of the temple. There is also a separate entrance for the crypt on the eastern side of the temple.